Boy George Relaxed and Happy at The Belasco Theater 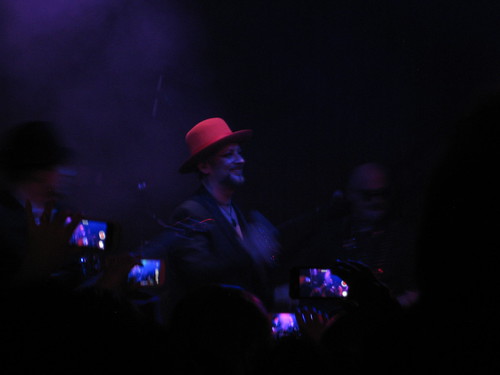 The Fillmore had tweeted that Boy George was scheduled for a show on April 28th. After confirming that it was not a DJ set I checked my calendar. I had already bought a ticket to see The Wanted the same night. I know, there is no comparison between the two, but The Wanted show was nowhere near sold out and I was concerned about not being able to sell that ticket.

I didn’t want to miss my chance to see Boy George, so I checked his tour schedule to see if he was playing close enough to do an overnight. He was scheduled to be in Los Angeles April 29th, a weeknight. Thankfully I was able to take two days off of work to fly down to LA just to see Boy George at The Belasco Theater in downtown LA. My small way of living a rock ‘n roll lifestyle.

Downtown LA has been in the process of being revitalized over the past several years. This trip was a great way to see its progress as well as check out a new venue. The Belasco Theater is a nice smaller theater with stunning architectural details. This trip made me want to find more shows to go see in LA. If only I could afford to do that more often.

There was no opener, just Boy George the entire night. Boy George looked relaxed and happy on stage. It felt like he had come to terms with the drama of the 80s and the legal issues of the late 90s/early 2000s. I knew he had a new album coming out and expected his setlist to include most of the new album, but was also hoping there would be a few Culture Club songs. He did in fact play most of his new album. I loved the vibe. It was chill and groovy at the same time. It made you want to sway and bounce.

Boy George announced that he was going to do a Yoko Ono song. Michael Viscariello, one of the people I went to the show with, ‘woo’d’ the loudest of anyone around us. (He’s obsessed with Yoko Ono.) The rest of us were not familiar with the song. The crowd went crazy as soon as the notes of the first Culture Club began to play. I was super excited that it was “Church of the Poison Mind”. It is the first song that comes to mind when I think of Culture Club. He performed three other Culture Club songs – “Do You Really Want to Hurt Me?”, “Karma Chameleon” and “Victims”. It all made me wish that 30th anniversary reunion tour would have happened. Guess I can hope for a 35th anniversary in 2016.

This show was definitely worth the trip down to Los Angeles.