One Republic at Shoreline Amphitheater 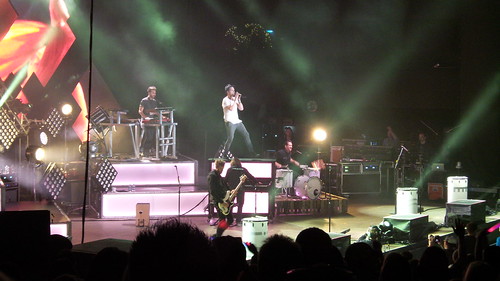 When “Apologize” was released in 2006, I was not a fan. I would literally change the channel every time it came on. One Republic’s second single “Stop and Stare” caught my attention and I started to become a fan. Their sophomore album included more songs that I liked including “All the Right Moves”, “Secrets” and “Good Life”. One Republic’s current album “Native” is filled with hits. I absolutely love “Counting Stars”. It’s an upbeat clap your hands and stomp your feet kind of song.

I was a bit turned off when Ryan Tedder said he found it cheesy when bands ask the audience to sing along as he was requesting that we sing along to “Something I Need”. He had said that there had been so many voices on the recording of the chorus that it wouldn’t sound as good if we didn’t all join in for the background vocals.

There is nothing like hearing the crowd sing every word to a song with such enthusiasm as a member of the audience. I can only image what it feels like for an artist to experience this. It must be a huge ego boost. I don’t find it cheesy at all. Of course, “Something I Need” wasn’t the only song Ryan Tedder asked the crowd to sing along to. I suppose he doesn’t really find it cheesy to ask the audience to sing.

This show was a lot of fun. The entire band was energetic. Ryan Tedder talked to the crowd and told a few stories. One Republic performed all of their hits and kept the audience engaged the entire show.

I’m still not a fan of “Apologize”. They didn’t win me over by mixing it with Coldplay’s “Yellow” – another song I dislike. But I am a much bigger fan of One Republic after having seen them live. 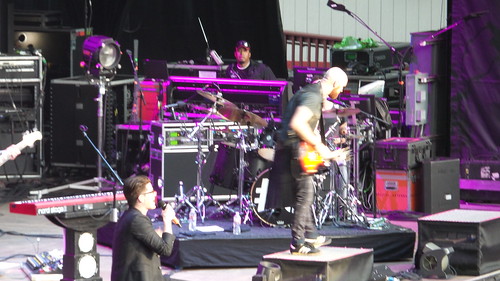 I saw The Script when they opened up for Train last year. I had been disappointed then that they hadn’t performed “Nothing” which I had thought was an extremely popular song here in the US. They did perform it for this show. Danny O’Donoghue asked if anyone still had an ex’s number programed into his or her cell phone. One girl enthusiastically dialed and handed her phone to Danny. He sang the entire song into the phone, but you could barely hear him singing.

The sound for Danny’s vocals was an issue for several songs. Thinking back to last year I think it may have been the same. Makes you wonder if that is because his voice is not as strong live as it is in a production studio.

American Authors was the first opener. Unfortunately I missed their set because I was stuck in traffic. Having a show start at 7:30p on a weeknight at Shoreline is just ridiculous. There are so many companies in the area compared to just a few years ago. It makes traffic a nightmare for concertgoers and employees trying to head home.