Posted on December 21, 2014 by addicted2concerts

Katy Perry’s writes extremely catchy pop songs. I don’t own a single album, but do have a couple of singles that were part of compilation albums I bought. I had debated on going to see the California Dreams Tour in 2011, but ended up not buying a ticket. After seeing footage from the show I was disappointed that I hadn’t gone and decided that I would see Katy Perry the next time she was in the area. Enter the Prismatic Tour. 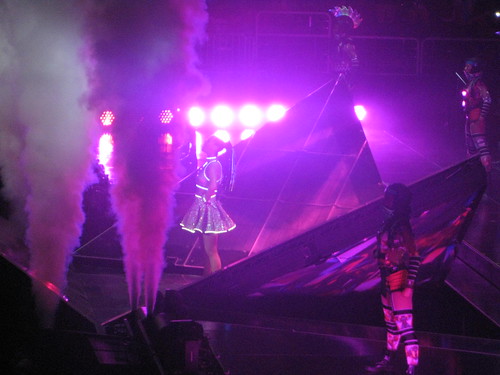 The show began with Katy Perry standing in the middle of a prism shaped portion of the stage that opened up to reveal her in a sparkly and reflective skirt as she sang “Roar”. Katy worked the prism shaped stage singing and dancing the entire night. There were parts of the stage with treadmill belts that added to the choreography. 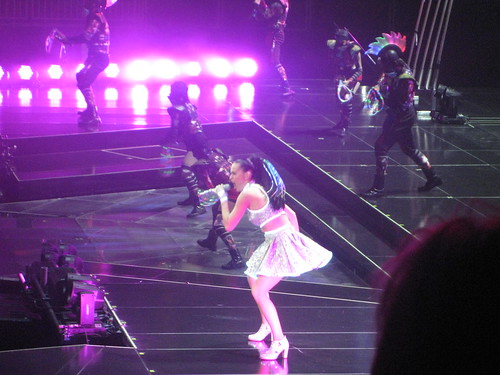 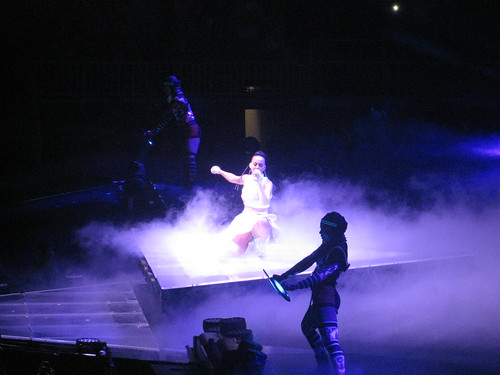 I was entertained the entire show, but there were parts that reminded me of other major tours I’ve seen recently. The horse Katy sat on during “Dark Horse” was similar to Cher’s Trojan horse on her “Dressed To Kill” tour. The acrobatics and spinning in the air were reminiscent of Pink’s “Truth About Love” Tour. 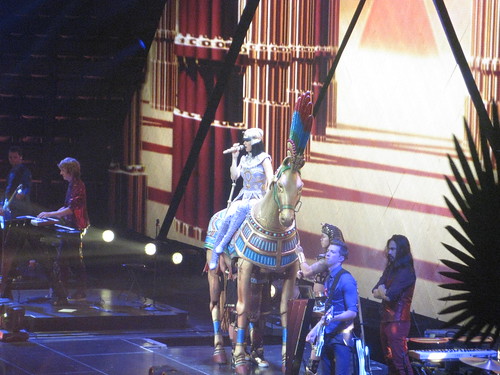 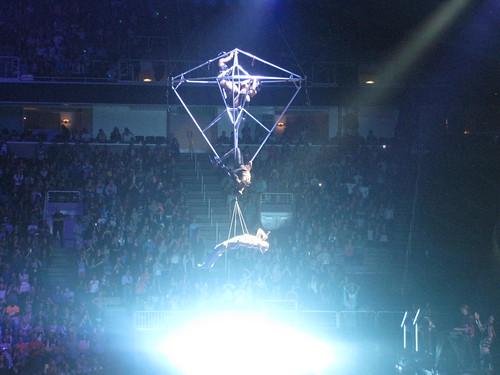 There was a section of the show where Katy “Purry” and her dancers were dressed like cats and danced on balls of yarn and cat scratching posts. This portion of the show creeped me out a bit. 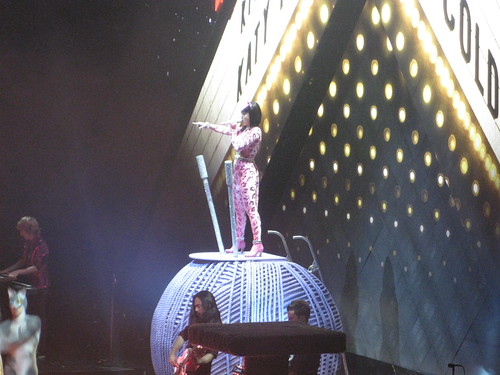 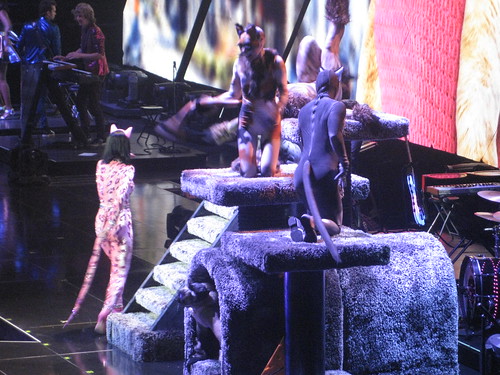 I realize that the average age of Katy Perry’s fans must be in the tween and teen range, but I was annoyed by her baby talk during the middle of her set. She acted shy, hid her face and asked the crowd if they liked her. 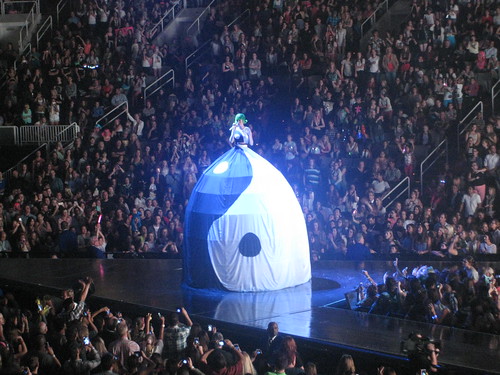 For “This Is How We Do” there were inflated parade style balloons of Cover Girl lipstick, Champagne, purse, taco and a pile of poo. She and her dancers ‘drove’, with the help of the treadmill belts, around the stage in an inflatable car. 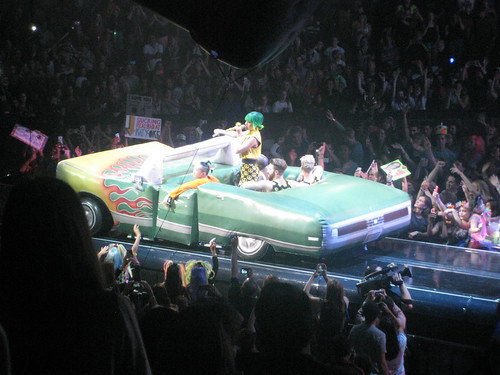 A girl from the audience whose birthday it was that night was brought on stage to sit on a giant cake during “Birthday”. 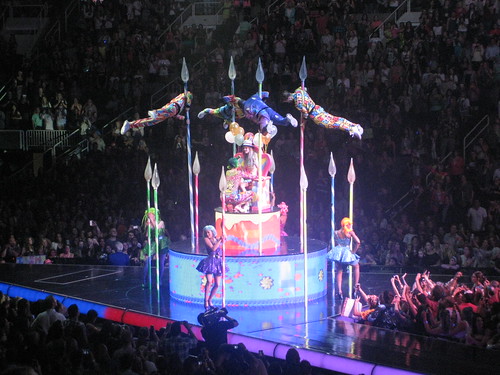 Katy flew around the arena with a bunch of balloons. 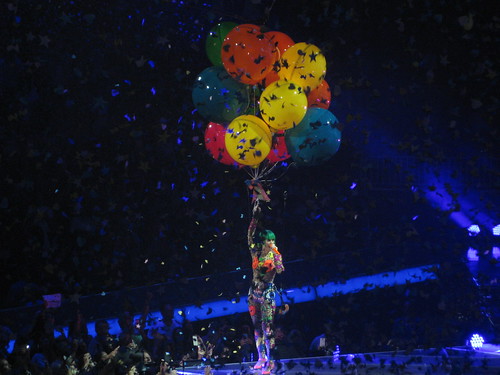 Before the encore, Katy was engulfed back into the prism from which she had appeared and then closed out the show with “Firework”. 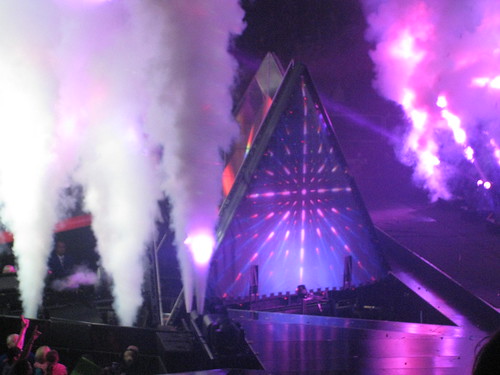 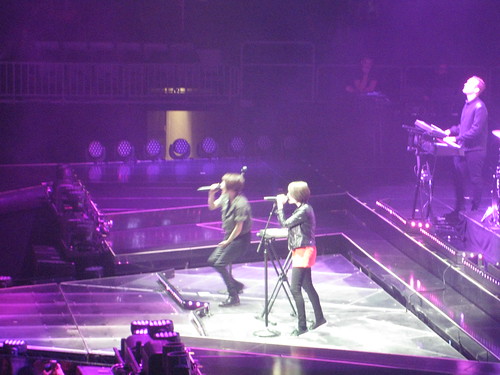 Tegan & Sara are identical twin sisters from Canada. The only song of theirs that I know is “Closer”. That is only because it had gotten a lot of video play on the VH-1 Top 20 Video Countdown. They were fine, but they didn’t turn me into a fan.