Stevie Wonder Songs In The Key of Life 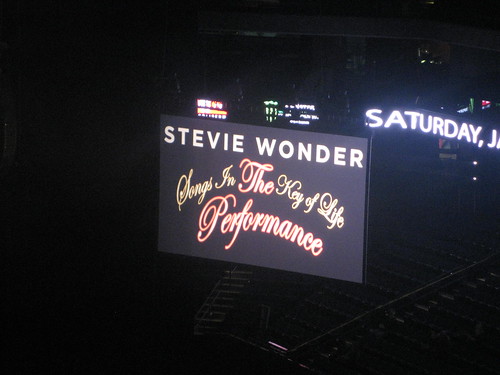 The legendary Stevie Wonder came to the Bay Area to perform “Songs In The Key of Life” in its entirety. While I am familiar with some of the songs on this album, I bought a ticket in the hopes that Stevie would have time to do some of the songs of his that I am more familiar.

There was no opener, but Stevie was not escorted out to the stage (by India.Arie) until 8:20pm. Twenty minutes later than the original show start time. Stevie spoke for about 15 – 20 minutes talking about how thankful he was for the time they had on the tour, the people they had met and the food they had eaten. He was then escorted to center stage where his keyboard and piano were located and the show got underway.

He started to perform the “Songs In The Key of Life” album from the beginning. Aside from a few other songs he sprinkled in, he essentially performed the album from start to finish. Stevie had a little “sing off” with his male back up singer, Keith John. After they went back and forth with Stevie trying to stump Keith, Stevie introduced him as the son of Little Willie John who was the original artist to record the song “Fever”. Keith began to sing this song with Stevie coming in towards the middle.

After 16 songs, Stevie announced an intermission and took a 20 – 30 minute break before returning to the stage. I figured he would perform two or three more songs since it was already past 10:30pm and shows typically end at 11pm. He continued to play well past 11:30pm and started to call himself DJ Chick Chick Boom. Having taken BART to the show, my friend and I had to leave before it was over in order to catch the last train back to San Francisco. “Living for the City” was playing as we walked out of the building.

Had Stevie Wonder started the show as originally scheduled at 8pm, I could have seen the end of the show and still made it home on BART. Oracle Arena had even recommended people take public transportation to the show, so I’m sure they didn’t know it was going to run long. I was a bit irked that the show ran long and that we had to miss the last three songs of the show. It kind of ruined the entire experience. 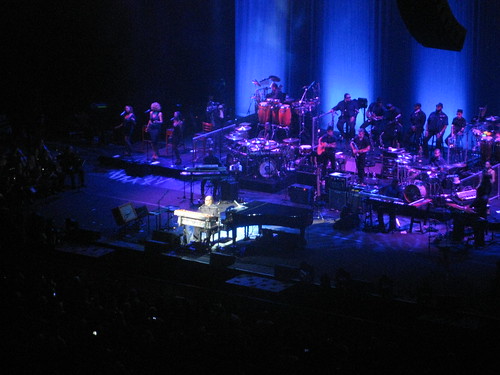 Setlist:
• Love’s in Need of Love Today
• Have a Talk With God
• Village Ghetto Land
• Contusion
• Sir Duke
• I Wish
• Knocks Me Off My Feet
• Fever
• I Left My Heart in San Francisco
• No Place Like Oakland
• Jams
• Pastime Paradise
• Summer Soft
• Ordinary Pain
• Saturn
• Ebony Eyes
• Isn’t She Lovely
• Joy Inside My tears
• Black Man
• All Day Sucker
• Easy Goin’ Evening (My Mama’s Call)
• Ngiculela – Es Una Historia – I Am Singing
• The Way You Make Me Feel
• If It’s Magic
• As
• Another Star
• Living for the City
• Don’t You Worry ‘bout a Thing
• My Cherie Amour
• Superstition 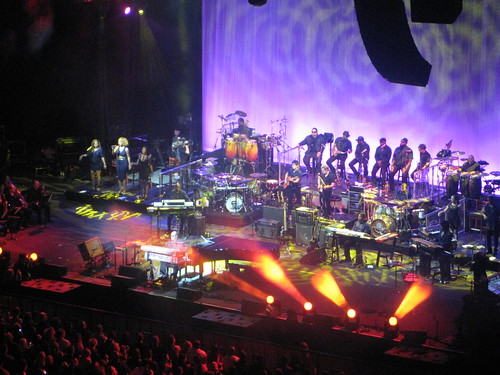