Sharon Jones & The Dap Kings at The Fillmore

Posted on January 8, 2015 by addicted2concerts 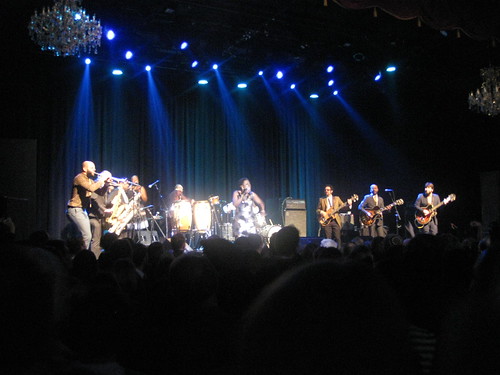 Sharon Jones returned to The Fillmore for two nights to close out 2014. I had first discovered Sharon Jones when I saw her performed on a talk show. I immediately thought, “I must see her live.” I loved her Motown Soul sound. Next thing I knew I was hearing her name everywhere – the Baader-Meinhof phenomenon.

I chose to see Sharon the first night of her two-night residency. She was fantastic. Her voice was as big as her personality. She pretended to have a diva attitude but showed you she was down to earth. A few songs in she talked about the new shoes she was wearing. She asked The Dapettes what brand they were. They told her they were Michael Kors. She told the audience that she wasn’t really into names she was into pretty. She then said that if the shoes lasted four songs they were keepers.

For one song she said she wanted to sing to someone but wasn’t sure if he was going to be too shy to come on stage. She then looked stage right and asked Shane to come out. He seemed a bit shy but he didn’t need a lot of coaxing. Sharon sang the song to him and then hugged him before he left the stage.

After a few more songs Sharon asked how many songs it had been and said the shoes were keepers but she was going to change from the 4-inch heels to the 2-inch heels. After changing her shoes she did some jumping up and down so she could get ready for some dancing.

Someone closer to the stage, Josh, caught Sharon’s eye because of his dancing. She brought him up on stage to dance with her for one song. He grooved the entire song and Sharon told him he had moves. After Josh left the stage, Sharon told us she was going to give us a lesson on dancing. The Dap Kings were playing a good background groove as Sharon talked about a dance. Then Sharon and The Dap Kings had the following exchange before each dance.
Sharon: “Dap Kings!”
Dap Kings: “Yeah.”
Sharon: “Give me something I can dance to!”
They would play louder and Sharon would do the dance. The dances included The Pony, The Jerk, The Swim, The Boogaloo and a few more.

Towards the end of the show Sharon mentioned how she had battled cancer last year and that she wasn’t sure if she would perform on stage again. She was happy to be performing for us that night. I was happy to be in the audience to witness her glory. 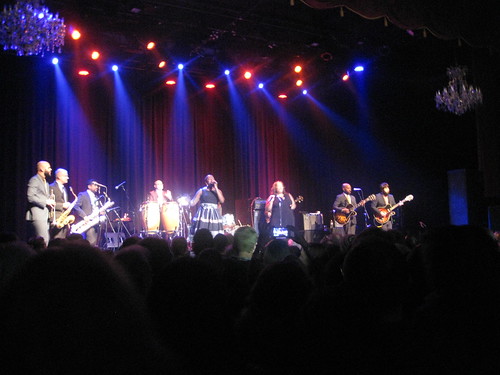 Just before Sharon Jones made it to the stage, The Dap Kings came out and introduced The Dapettes. Saundra Williams and Starr Duncan have an album that will be released soon. They performed a few songs and entertained the crowd before taking their spots on stage. 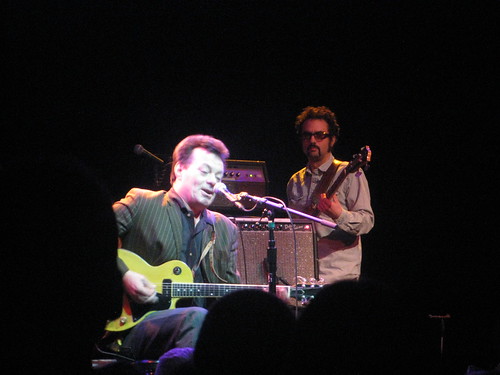 James Hunter, an English R&B musician and Soul singer, opened up the show. He is usually part of the James Hunter Six, but this night he was joined on stage by The Dap Kings bassist Bosco Mann. He was ok. I didn’t have strong feelings either way.

1 Response to Sharon Jones & The Dap Kings at The Fillmore