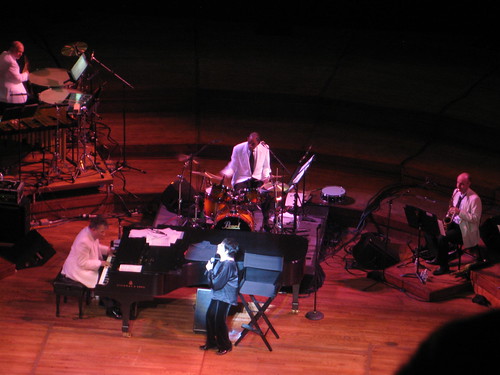 In my efforts to see the legends before they leave us I saw Liza Minnelli at Davies Symphony Hall. She did not perform with the symphony but rather her own band. I had wondered how she would do considering how fragile she had looked at The Oscars.

Liza walked out in her signature black pants and off the shoulder top. She had a very long red scarf that almost touched the ground. There were times I was concerned she would step on the scarf and fall. Thankfully this never happened. She started the first song center stage and then walked over to the piano, which moved a bit when she leaned on it. She made a comment about it, which made the audience laugh.

She dragged her director’s chair to center stage and sat down. I couldn’t believe she didn’t have someone to do this for her, but maybe it was part of her shtick. Again I was concerned that long scarf was going to be an issue. I thought she might choke herself with it as she sat down. Finally her piano player took the scarf and placed in on the piano.

For the most part Liza’s voice was solid, but she did struggle with some of the big notes. She would pause to take a drink of water before trying to hit the notes saying she wanted to really hit it for us. While she didn’t hit them she definitely entertained and charmed the audience with her performance.